The third version of the embroidery machine has been developed since summer 2016 with several objectives in mind:

For now only the mecanical parts has seen the improve the rest will come in time.

The 3D printing process is very adapted to doing prototypes and was perfect for our second version but this one 10 hours of printing were not feasible. We decided to try a machine often found in makerspaces (but recent in the lab) a laser cutting machine ! 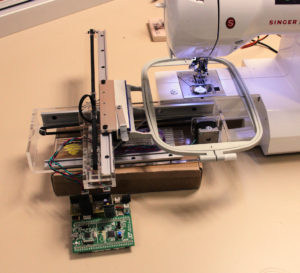 Most of the elements were lasercuted in 5mm PMMA (which solved the aestheticism part)  some small pieces (ball bearing supports) were cut in 2mm PMMA.

these elements were glued together to make them stiffer the structure in reinforced by linear guiding rails of better quality (shopping for them is easier) hen the V2 version (drylin® sliders from Igus).

the stiffness is also permitted thanks to the wider space of the rails base and a triangle disposition with no hyperstatiscm of axis Z
A new design for the running belt prevent the torsion around the attached points of axis  by widening them.

The use of the Igus rails diminished a lo the height of the set up ( the allow the stabilization foot present on every machines on the market) With his version the set is 5 cm high. 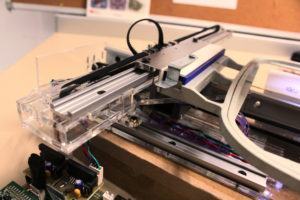 The y axis was studied the allow the installation of an adaptator for the haberdashery frames. We right now have an adaptator for a Brother SA439, de 5″x7″ (13x18cm) but other frames and brands are completely adaptable.

A 3Bis version is on the road with electronic case and some suprise.