After numerous searches on the inernet we discovered that embroidery on machines and in general sewing on machines had no been studied by the open source community.
Despite of some noteworthy exceptions (Tau Meta Tau Physica, Valentina), most softwares were most of the time abandoned.

Because we never had the opportunity to see what embroidery softwares were like (in the shops what they sell) we definitely had fresh eyes.
Numerous tutorials are available on he internet allowing use to have an idea of what the software sold by brands offer.

The goal is to create a light, intuitive, really interactive and cross-platform (linux mac windows) pattern making software allowing the public to use it right away specialy those who are not familiar with the world of hackerspaces. 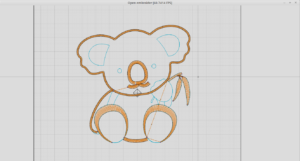 The software is style being developed it is not yet usable by the consumer and some function still have some issues.
Even if some people at the Lab started to make some embroidery tests and let us know what they were thinking about the product it does crash a few time , and the interface is reduced to it’s minimum (all commands are made by shortcuts on the keyboard).

You can use it on it’s own to create patterns then input them an machine sold in the shops or with our set-up. (you can see the progress on the laptop as the embroidery is made) 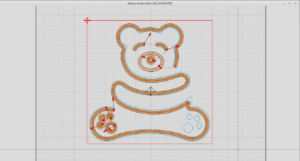 Our software is developed to be used next to the vectorial drawings work.
This area being well covered by open source sotfwares we didn’t want to waste our time on this.
It uses SVG files a standard format widely used by consumers. We edits with the sotfware Inkscape.

The two tools available are the linestitch and the birailStitch. A third tool the fillStitch (filling function) is beeing developed.

To this day nine patterns are available for the linestitch and the future filling function from the straight stitch to a star or a satin stitch.
The creation of personalized patterns are of course in our to do list.